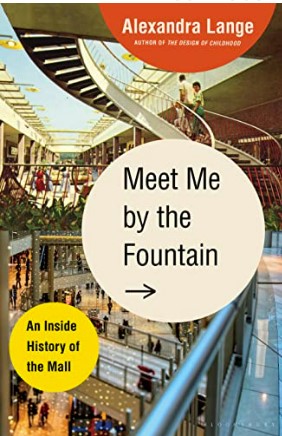 “A fantastic examination of what became the mall … envision[ing] a more meaningful public afterlife for our shopping centers.”―Vulture

“A smart and accessible cultural history―outlining the social, economic and architectural forces that led to the creation of U.S. malls as we know them . . . Lange doesn’t have a false nostalgia for malls. Meet Me by the Fountain is frank about how they have usurped public space. But at a time when malls still serve the function of bringing us together, Lange’s book is a thoughtful guide to helping them do what the best of them already have―but better.” ―Los Angeles Times

“Artfully elucidates the 70-year history of the mall ... Lange asserts that malls, as ‘blank boxes in the middle of the big empty parking lots,’ can ‘serve as a land trust’ for the 21st century. This sounds like a stretch, but it proves to be true. Some malls die, but most don’t…Ms. Lange’s elegant conclusion: The mall is dead; long live the mall.” ―Wall Street Journal

A portrait--by turns celebratory, skeptical, and surprisingly moving--of one of America’s most iconic institutions, from an author who “might be the most influential design critic writing now” (LARB).

“A fantastic examination of what became the mall. Combining architecture’s past with her own, Lange reflects on the malls of her adolescence and in turn prompts you to think about the ones you grew up around. A lot of things come to mind: glossy tiled floors, the glow of a backlit store map, tinny-sounding Muzak on echoey overhead speakers, whiffs of cinnamon buns and orange chicken. Lange shows us how these things become collective memories in the U.S., then looks abroad to envision a more meaningful public afterlife for our fallen shopping centers.” ―Vulture

“[Meet Me by the Fountain] shines in its study of malls as symbols, and drivers, of American consumerism and urban sprawl . . . Though Ms Lange pays rapt attention to malls’ shortcomings, her book is refreshingly optimistic.” ―The Economist

"The American mall has supposedly been dying for years ... Meet Me by the Fountain challenges the dominant narrative ... Lange’s book reminds us that the mall has helped shape American society, and has evolved with our country since the 1950s. And she posits that there’s still a place for malls in our society, as long as they adapt to better serve their communities." - The Atlantic

“A well-researched introduction to the rise and fall and dicey future of an American institution.” ―New York Times

“An insightful look at the design of both objects and public spaces.” ―InsideHook

“[Reacquaints] us with the roots of half-accomplished dreams; in this case, one of our best design writers traces the influence of Waukegan’s Genesse Street, “Dawn of the Dead” and department stores on now-struggling suburban sprawls saddled with acres of parking.” ―Chicago Tribune

“Dives into the storied, almost nostalgic, past of the American mall and makes a case that, no, malls aren’t dying―they’re just changing with the times.” ―Fast Company

"Lively, deeply researched, and ultimately optimistic…Meet My by the Fountain not only makes the case for the mall’s existence, but it also captures what made them such influential social spaces early on and what continues to make them important architectural spaces today." - The Architect’s Newspaper

"Reading this book is like looking in the nooks, crannies, and hidden hallways of your local shopping emporium with a critical eye. It's a hark back to your childhood in the most intriguing way." - The Bookworm Sez

“This thorough, culturally aware history will surprise and inspire audiences who may feel they already know the story of the shopping megaplex … Despite malls' sometimes problematic past, Lange envisions an inspiring, community-oriented repurposing of these monuments to consumerism ... her hope and optimism for more diverse and sustainable mall uses will inspire readers to see these behemoth structures as a vital and versatile resource for the future." ―Shelf Awareness Pro

“A deeply researched history of the American shopping mall . . . Lange concludes by examining the possibility that the mall might be reborn as something more than simply a shopping space by incorporating offices, hotels, and even educational centers . . . The mall is dead―but it may yet live again, as Lange’s instructive book capably shows.” ―Kirkus Reviews

“A thought-provoking cultural history . . . Lucid and well researched, this is an insightful study of an overlooked and undervalued architectural form.” ―Publishers Weekly

“In this spry architectural history, Lange tracks the American shopping mall's postwar origins, evolution during the second half of the twentieth century, and twenty-first-century collapse and future possibility ... invite[s] readers to map their own mall experiences onto the chronologically organized accounts of architects, developers, and specific sites that follow.” ―Booklist

"Just as Lange reflects on the joy she found at the local North Carolina mall of her childhood, many readers will likely reminisce about the malls where they once shopped or worked or simply hung out. But Lange eschews nostalgia in favor of bold ideas that focus on community and sustainability." - Christian Science Monitor

"It is hard to imagine a more complete social, architectural, cultural, economic or cross-national comparison of shopping malls than this book provides." - Inside Higher Ed

"Design is the leitmotif that knits the narrative in Meet Me by the Fountain together, but the breadth of Lange’s analysis gives it deeper meaning ... Engrossing and accessible reading." - Azure Magazine

“An architectural page-turner. This insightful, witty, and smart book captures everything compelling and confounding about the American mall.” ―Roman Mars, co-author of THE 99% INVISIBLE CITY

“A mall is not just a mall in this fascinating, far-reaching history. Alexandra Lange nimbly navigates sweeping changes in American society, explaining so much more than how and where we shop, and―much like the architectural institution at the book’s center―providing plenty of fun along the way.” ―Julia Cooke, author of COME FLY THE WORLD

“Alexandra Lange is the poet laureate of mall culture, and her book is as delightful as a cold Orange Julius. While it is deeply researched and full of fascinating insights, it never discards all of the things that made the mall the hub of social life that it once was. This book makes me want to listen to Muzak and stroll past a Sharper Image all over again.” - Rachel Syme, staff writer, The New Yorker

“The shopping mall is an American tragedy but also a triumph. This book shows both its sides with generosity and tenderness.” - Ian Bogost, author of PLAY ANYTHING

"If you want to understand America, look no further than the mall―that is, if you can still find one. With Meet Me by the Fountain, Alexandra Lange brilliantly explores how these places we thought were just churches built for worshipping at the altar of capitalism actually represent everything we are, aren't, want to be, and never knew we could have been.” - Jason Diamond, author of THE SPRAWL

Alexandra Lange is an architecture critic and the author of four previous books, including The Design of Childhood. Her writing has also appeared in publications such as The New Yorker, The Atlantic, New York Magazine, the New York Times, and T Magazine, and she has been a featured writer at Design Observer, an opinion columnist at Dezeen, and the architecture critic for Curbed. She holds a PhD in twentieth-century architecture history from the Institute of Fine Arts at New York University and has taught design criticism there and at the School of Visual Arts. She lives in Brooklyn.