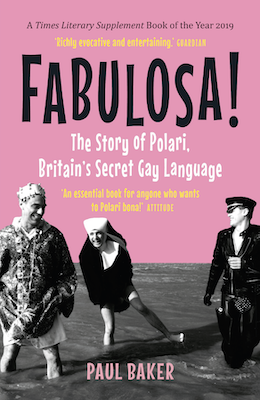 "Baker intersperses his account with snippets of interviews with Polari speakers, whose firsthand recollections are invariably arresting and funny. He is partial to a spot of innuendo himself, and manages to slip one in every now and then . . . [T]here is some evidence that the language persisted into the 1980s and ’90s in theater circles, and it continues to enjoy a healthy afterlife as a cultural curio—of which this delightful book is just one manifestation."
- Financial Times

"Polari, like some admirably resilient weed, will not die. . . . It is as much for its vocabulary as for its sociological vagaries that we read Baker’s always illuminating book. . . . Fabulosa!"
- Telegraph

"Though a language smacking of Carry On films and saucy seaside postcards, it’s the tragic torment and harassment that gave rise to Polari in the first place that must not be forgotten and which is why this book is important."
- Daily Mail

“Baker’s intriguing and often amusing book is the work of a writer interested in language who has been led by his subject to think about social oppression. . . . [He] writes well about the milieu in which Polari flourished—the theater and the merchant navy. He is especially acute on the political uses of vulgar innuendo. . . . And Baker’s interviews radiate warmth and good humor.”
- Spectator

“Brilliant, readable nonfiction is out there too. . . . For those who want to be in the know, Fabulosa! by Baker is a compelling history of the linguistic lengths to which gay people had to go to hide in plain sight within an aggressively homophobic culture.”
- Observer, "Summer Reading"

“As a fag-hag of some vintage, I enjoyed this illuminating look at Polari—a language used chiefly by gay men in the first half of the twentieth century. There's a fascinating look at its origins, from Cant to lingua franca, and from Italian to Romany; and its usage, from slang spoken by prostitutes to perhaps its most celebrated outing, by characters Julian and Sandy in the classic 1960s radio show Round the Horne.”
- Caroline Sanderson, Bookseller, "Editor's Choice"

"[Baker] is especially strong on the changing attitude towards polari within the gay community in the seventies and eighties, and on the important reclamation performed by The Sisters of Perpetual Indulgence. . . . His approach feels fresh, and the personal interludes add to the narrative without being overly intrusive. Fabulosa! is also an excellent primer for would-be polari speakers."
- minor literature[s]

“Baker tells the history of Polari with pride, passion and humor, making clear that camp can be ‘deliciously political.’ Fabulosa! is an important celebration of Polari’s message—which is about laughing at your flaws, creating hope from tragedy, and seeing humor in the face of cruelty and oppression.”
- London Magazine

"Funny and joyous. . . . Fabulosa! is a fascinating and fantastically readable account . . . This is an essential book for anyone who wants to Polari bona!"
- Attitude Magazine

"Baker’s exuberant, richly detailed history of Polari, a 'secret' language used chiefly by gay men in the 1940s and 1950s, is a delightful read."
- Tatler, "Best Books for Late Summer/Autumn 2019"